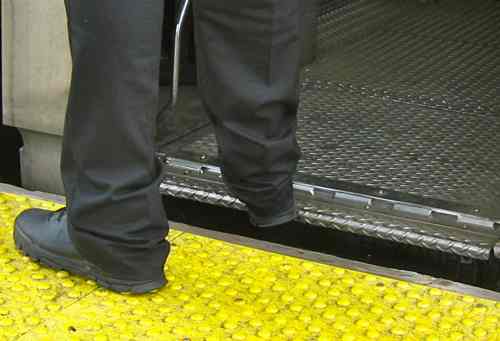 The man treats us to a rolling simian strut along the commuter rail platform, lacking only a pack of cigarettes rolled up in his tee-shirt sleeve. It is a rich rendition of the “macho guy” swagger, so without a second thought I hook myself on the stereotype. The price we sometimes pay for a convenient snap judgment stems from the inaccuracy of our stereotypes—not necessarily that they’re wrong, but that they’re right and then some. “Macho guy” was true enough, but if I were better at snap judgments I should have guessed “macho guy with anger management issues and poor impulse control.”

The man climbs the six steps to the elevated shelter. He’s acquainted with a young guy who was already here and engages him in conversation, of which he provides the lion’s share, talking and pacing. He tells the kid he’s gotten an inheritance and now it’s time to party: “It’s a don’t give a fuck kind of day.” Having pinpointed the mot juste, he’ll riff on the phrase until his train comes. The kid’s murmurs betray no great enthusiasm for getting in on the ground floor of a don’t give a fuck kind of day.

He’s 53, from Fall River, his wife’s a saint (she’s been straight for 30 years and has put up with him for 15), his mother died when he was incarcerated in Rhode Island, and he finds our county jail uncongenial. I’d tell you that I deduced this from Sherlock-sharp observation of his appearance, but I’ve already said I’m not great at stereotype-based snap judgments.

This is how I renewed my acquaintance with fear—not my perfectly reasonable fears of social gatherings and spiders and my inevitable physical disintegration, not even the crazed anxiety as I lie awake two hours before dawn, my mind spinning through the inexhaustible list of things that I’ve done wrong and things that could go wrong—raw reptilian-brain fear.

Pacing still, the guy reminisces about that time on the train. Some kids had stuff impeding his passage down the aisle; he moved it; the kids came at him; he thought they were attacking him. His account is a marvel of studied blandness, which surely spins away any culpability for what he did next: “I busted their heads.” He still seems bemused that the criminal justice system got involved. Then there was the time the police butted in when he confronted a trainman who had “disrespected” his wife. That one cagey word does a lot of work, justifying his assault on the trainman for any transgression from an imagined eye-roll to the deadliest insult.

A little late in the game I begin to understand—it might have been when he asked the kid “You know how the little things sometimes set you off?” He has a hair trigger, he knows he has a hair trigger, and, to be charitable, he’s not above putting himself in positions in which to indulge it. It occurs to me that this man might be dangerous right now, and my illusion that we’re all civilized people here bursts, meeting the fate of all bubbles.

I try to shrink, willing my body to smallify itself to invisibility, because my mere presence might set him off. The whiff of my fear might set him off. There is no telling what might set him off—any damn thing could. The guy is disturbingly random, lacking even the bizarre consistency of the insane. My gut feels panic slithering in, and it whispers, “You could die here.” It is said that the certainty of imminent death is liberating, but I have only an ambiguous chance of dying and no path to acceptance or resignation.

What liberates me is the train’s arrival. In retrospect, my peril lay in fear itself, though my viscera told me otherwise. I heard no evidence that this berserker had ever killed anybody; at worst, there was a slim chance he’d beat me up. And now I’m on notice that it’s at least possible that I’ll fail to meet true death with anything approaching courage. Forced to choose, I’d choke and make the possum move: paralyzed ignominy over heroism.